Two birds living together, each the friend of the other, perch upon the same tree. Of these two, one eats the sweet fruit of the tree, but the other simply looks on without eating. The two birds are the Jiva and Isvara, both existing in an individual compared to a tree. [Mundaka Upanishad]

What interests us about Stoicism is the paradigm. The paradigm does not belong uniquely to the Stoics but stretches back from Heraclitus and Parmenides right through Leibnitz to Kant, Fichte, Hegel, Marx, and Yung and to some of the more recent moderns. The paradigm has been referred to as monism.

The natural opposite to monism can be seen in the present sciences of our day. These sciences are characterised by atomism, fundamental dualities and abstraction. These traditional sciences, which include axiomatic mathematics, are aligned on virtually the same epistemological axis as Epicurean. Charles Sander Peirce pointed this out likening the Epicureans to John Stuart Mill’s philosophy. Bertrand Russell and Karl Popper could be added to the list. As you know, the author characterises the Epicurean type paradigm as left side science, as this is this kind of thinking is privileged by the left hemisphere of the brain. Initially we used this as a metaphor but things have started to become a little more literal. A lot is known about the functioning of this side of the brain, its syntactic language capability, but semantic limitations, its attention, even obsession, to fine detail, its tendency to fabulate when in doubt. A general characteristic of left side thinking is the continuous attempt to meld the mind to the world.

What is of interest here is the complementary mode of thinking, right side thinking. Much less is understood about this side of brain functioning. Here I am talking about the biological brain and also the “epistemological brain”. The latter brain contains, or should contain, two hemispheres of complementary knowledge.  In this right side case, rather than mould mind to the world, the task becomes that of moulding the world to fit the mind. In other words, if the traditional “left side” sciences are bottom up oriented, the right side science will be a top down science – non-empirical, all worked out from pure reason alone – the Kantian scenario.
In our view, the right side thinkers par excellence were the Stoics. It appears to us that the Stoics were more advanced in many ways than even Hegel, the most prominent right side monist Western thinker of modern times.
It might seem strange that we have difficulty talking about the Stoics without continuously considering them in oppositions with their opposite number, the Epicureans. Even worse, we keep spreading the discussion across a left side right side epistemological dichotomy, a dichotomy that has distinct biological reverberations. Not only is knowledge organised along these lines, not only the universe but the very architecture of our brains also has this shape – a left side, a right side and even a back side with frontal lobe front side. Everything surely is connected and intercalated, as the Stoics claimed. Maybe they were right.
The basic message we want to get across is that there are two basic philosophical paradigms. Now everyone knows that already. The Western philosophical tradition has been split right down the middle almost since the year dot. What interests me is the multi-paradigm paradigm. This has been a long interest even in the author’s professional work developing computer languages. To many in the IT community, computer languages are like religions. The author treated each of the four fundamental computer language paradigms as separate dogmas and integrated the dogmas. This gave him a lot of practical experience in integrating what appear to be totally conflicting dogmas. Single doctrine doctrines are just doctrines and dogmas. Multiple paradigm paradigms become systems.
And so we finally come to the main point. We believe that one cannot arrive at a deep fundamental understanding of Stoicism without simultaneously understanding the nature and way of thinking of its opposite, which in the occurrence, is incarned in the Epicurean dogma. In addition, this great epistemological divides should be looked at from higher perspective than merely this historic occurrence. These two doctrines are instances of a greater generic dichotomy that has further instances in Cosmology right across to brain architecture.
Right side thinking expresses itself in oppositions. Thus, even to promote a particular doctrine such as the basic paradigm of right side thought itself, that paradigm must be put in opposition against others. Perhaps one should note in passing that Chrysippus himself practiced this technique. As Diogenes Laërtius wrote, early on in his studies “he got the habit of arguing for and against a custom.” (LAERTIUS)Chrysippus was also known for his prolific and lengthy citations. This is an important aspect of the critical nature of right side thinking. The demise of a vibrant critical tradition in politics and the social sciences is a lamentable fact in present day society. In the case of the sciences, such a tradition is totally absent: the only critique is that of peer review. What we need is a totally different kind of science to put the cat amongst the pigeons.
…
At this present time, our Western culture and our education system place all the emphasis on left side thinking. This is particularly apparent in the sciences. There the fundamental left side paradigm goes right back to the first atomists, Leucippus and Democritus, forerunners to Epicurus. The present day traditional sciences and modern formal mathematics continue the development. Some of the key aspects of this tradition are:
·        Dualist and atomist – tolerates rigid dichotomies.
·        Abstraction
·        Languages
·        Bottom up methodology
·        Likes labelling things.
All of these characteristics are interrelated and are expressions of s single underlying paradigm. From a neuro-psychological perspective, these are also fundamental characteristics of left hemisphere brain function.
When it comes to right side thinking, it has its own tradition with the Stoics occupying a most prominent position. Some key characteristics of right side thinking are:
·        Monist – no rigid dichotomies, everything relative.
·        Generic (Non-abstract)
·        No Languages just bare meanings – semiotics and a semiotic code.
·        Top down methodology
·        Likes expressing knowledge in terms of oppositions, not labels.

Another dramatic difference between the two hemispheres is that the left hemisphere, on its own, suffers from hemi neglect. This means that the left hemisphere appears to be only conscious of one half of reality. It will only recognise and be conscious of one side of the body, the right side. It will not be conscious of its left side or of anyone or anything on its left side. It may even only be able to see the right side of a clock. The right hemisphere exhibits no hemi neglect, recognises both sides of the body as its own, and sees a whole world.

In brief, the left hemisphere can have languages whilst the right side is mute. The left hemisphere sees a half world; the right hemisphere sees a whole world. These are differences easily observable in the clinic. However, these are differences between the biological hemispheres. A persistent theme in this work is that the biological brain and the structure of knowledge, the “epistemological brain,” share a common generic structure. If indeed this were the case, then the phenomenon of hemi-neglect for the left hemisphere and language muteness for the right hemisphere should have some epistemological analogues.
It finally comes down to the fact that there are two distinctive modes of thinking, a left side and a right side. If we admit of a second dichotomy, as indeed we must, then we end up with four modes of thinking. This secondary dichotomy is the front back dichotomy that we have been talking about. We argue that this four-cornered playing field provides the common ground for organising knowledge. For right side science, all knowledge is defined relative to this playing field, relative to the generic subject.

Biochemistry and the Double Articulation 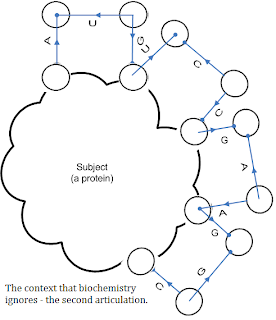 Figure 25 A schematic illustrating the two articulations of the genetic code when encoding a biological body. The first articulation is biochemical transcription. The second articulates the specification in terms of a sequence of wholes. The genetic code becomes the generic code.

The Logic of Relativity
Genetic Code and Gender