There are two kinds of physics one classical one weird. Classical physics based on the pleasing common sense notion that there is a realist mind-independent reality “out there,” just waiting to be measured and described by precise, deterministic, mathematical models. For terminological convenience, I will refer to this kind of paradigm as left side. In this paper, I address the complementary opposite, the right side paradigm. The right side leads to physics that is far removed from common sense. This is the natural domain of quantum theory, a domain full of the apparent weirdness such as the quantum mysteries of uncertainty, the wave-particle duality revealed by the double slit experiment, entanglement, and so on.The rational foundations of the classical left side paradigm have reached a relative maturity and demonstrates a high degree of rigour concerning its foundations. The same cannot be said for the right side paradigm. Quantum theory with its apparent counter-intuitive weirdness and many mysteries is in dire need of formalisation. The objective of this paper is to provide such a foundation and even a language based calculus. The calculus provides an alternative to the Standard Model and provides a much more detailed account of the elementary logical structure of matter independent of the need for any empirical observations. 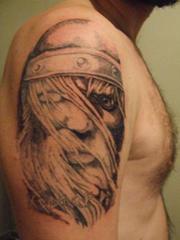 Like Odin, the ancient Norse god of thought and logic, present day physics achieves rational clarity by a simple astuce, that of being one eyed. According to present day orthodoxy, there is only one scientific paradigm. Science is mono-lateral, not bilateral. The paradigm must be fundamentally left side and thus realist. The apparent weirdness thrown up by quantum theory demands a quest for further refinement of existing orthodoxy, not another radically different paradigm switch. There is no right side science. This is not the position taken in this paper. One can still remain true to the one eyed Western tradition illustrated by the monocular Odin, god of reason. All one has to do is to use the other eye but not at the same time of course.

I argue that science must be bilateral. There must be two separate, fundamentally opposed but complementary paradigms.

The idea is far from novel. Bohm argued his own form of bilateralism with his notions of the Explicate and Implicate orders. Dirac saw the two paradigms of physics as one fundamentally temporal and the other as fundamentally spatial. The philosophers see it as an opposition between physics and metaphysics.

The general characteristics of the left side paradigm correspond to what is called the Scientific Method. As well as being fundamentally realist, the methodology is reductionist, atomist, and dualist. If there is going to be a symmetry between the two paradigms, the right side methodology one would expect the right side paradigm to be non-realist, non-atomist, and non-dualist, whatever these terms might eventually mean once formalised.

Underlying these dichotomies between realism and non-realism, dualism and monism and so on, there must be a fundamental dichotomy from which all others arise.

The left side paradigm starts with the subject-object dualism taken at the macro level that demands a pure realism where the object of study is objectified by eliminating all reference to the subject, which remains forever invisibly off stage. In empirical science, the object of the science is embraced in an environment called the controlled experiment, a subject free laboratory. The subject, in this context, becomes impersonal and has sometimes been referred to operate as the God’s eye view and even the view from nowhere, empirical scientists would probably prefer the interpretation of the view of the objective, dispassionate observer. Traditional mathematics objectifies its each of its problem domains by a controlled rational environment defined by a set of axioms. The subject is nowhere to be seen in axiomatic mathematics, as all mathematical entities are objects. Like in the empirical sciences, the implicit macro level impersonal is invisible in the formalism. Given an axiomatic system A, the only macro dualism in mathematics is the notion of the mathematically dual system A`. However, the allusive subject is nowhere to be seen in A` as, just like system A, the mathematical entities of A’ are all objects. Axiomatic mathematics is a two-headed coin.

The strength of Western culture is to be like Odin, one eyed. But which eye? Right eyed is to be left-brained. That is the way of present day science. The secret towards an integrated scientific view of reality may be to be one eyed but to change from one eye to the other, depending on circumstance or lack thereof. Only to be one eyed at the one time. Present day science is fixed right eyed, hence left brained. The alternative perspective is ignored. What is needed is a bilateral approach to science. Present day science is mono-lateral. Odin was much wiser than that, surely.