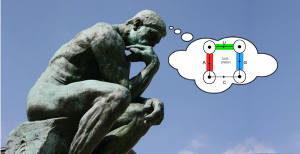 I presented a paper in the session on “Physics and Logic.” organised by Bob Coecke.


Keywords:  Periodic table of subatomic particles, Geometric Algebra, Stoic Logic, operational calculus, sub-quarks.
Abstract
The  problem  tackled  in  this  work  is  to  develop  from  purely  rational considerations the foundations and ontology of forms universally applicable to any self-managed autonomous system.  The physics universe is a special case  of  such  a  system.   The  approach  is  fundamentally  a  priorist  and  so free of empirical or axiomatically determined structures.  Key aspects of the approach  are  developed  from  a  reconstruction  of  Stoic  natural  philosophy and logic.
Leibniz famously introduced a new dimension into this ancient problematic,  notably  that  of  developing  a  theory  of  the  forms  of  nature  in  terms of  a  “geometry  without  number”.    Nowadays  we  see  that  there  are  two modern  geometric  traditions,  one  analytic  (Analytic  Geometry  [AG]  generalized  from  linear  analysis)  and  the  other  synthetic  (Geometric  Algebra [GA]).  GA  arises  from  the  exterior  and  geometric  products  of  Grassmann developed further by Cayley and Hamilton and in modern times by David Hestenes.   Hestenes  and  others  claim  that  GA  is  the  fulfillment  of  Leibniz’s  dream.   GA  certainly  provides  the  great  simplifications  that  Leibniz demanded and is free of coordinates.  But it is not free of number, nor does it provide an algebra based on “a few letters” that would describe the forms of nature both in the biological and non-biological worlds.

This work is presented as a true fulfillment of Leibniz’s dream by developing a more fundamental version of GA which is truly a “geometry without number” and integrating it into a radical reconstruction of Stoic logic and physics.

Since the universe we live in can be considered as a totally autonomous self-managed system, the resulting theory should be applicable to developing  the  foundations  of  physics  from  a  fundamental  quantum  perspective. This  turns  out  to  be  possible  and,  unlike  String  Theory,  leads  to  practical results.  One result is the development of a sort of “Periodic Table” of subatomic  particles  that  extends  beyond  the  already  known  constituents. The  theory  predicts  a  lower  “sub-quark”  level  as  the  primary  substratum and.  Unlike  the  Standard  Model”  does  not  require  quarks  with  fractional charge.  Everything is presented in terms of geometric semantics including such allusive notions as “colour charge.”

The  end result  can  best  be  understood  as  “doing  a  Heaviside”  by  presenting quantum mechanics in a time independent “non-diachronic” form. This approach is considered as the complementary opposite of the present day standard approach.  The tools of Laplace formalize Heaviside’s approach and works well for DEs but not for partial DEs.  To universally handle the latter, a more powerful formalism is required.  The elements of that approach can be found in Stoic logic once properly reconstructed and explained.

Full paper and book in preperation

Database
The prototype database for “the  periodic  table of subatomic particles” can be found here. on this website here..