As for the shape of this entity, the generic subject, it has a left, a right side, also a front, and a back. This is the structure we have been referring to as the semiotic square. It is a structure that can be interpreted in many ways, as a blueprint for epistemological organisation of knowledge, for example. There are also ontological, and of course many biological interpretations. On the biological front, this structure can be thought of as the structure of a whole, as coded by a chromosomal codon. Any biological organism is organised as an entity viewed as a whole from a myriad of points of views. To each codon, there corresponds a holistic point of view. The genetic cum generic code is the language that articulates the geometric algebra of this holistic view of the organism. Another interpretation of this highly generic semiotic square is that it offers a schematic for elementary cognitive structure.

So prodigiously generic is this structure that it can make the head spin. To top it off, we now have Chrysippus joining the fray. Now Chrysippus, the most important thinker of the Stoics, was conceded by the ancients to be the equal of Aristotle. In the figure below, we have organised four of his five fundamental syllogisms into a form that falls quite naturally into the elementary structure of the generic semiotic square. As can be seen, the premises of the first and the second hypothetical conjunctive syllogisms make one diagonal of the square and the two disjunctive forms mark out the other diagonal. It is becoming clear that we have here, a structure that resembles the Square of Oppositions of Aristotle. The Scholastics added the AEOI four lettered labelling to Aristotle’s system and spent over a millennium probing into its delights. Not to be outdone, we have added our lettering to our reconstructed version of the Chrysippus Square in the hope of preparing it for its reinvigorated role in the present millennium. Suffering from a lack of creativity, we have borrowed the RNA version of the biologist’s genetic code. Why invent when you can steal, is our motto. It took the author a little while to get the right fit, but he is reasonably confident that his allocation of the CAUG lettering is spot on. He would be very miffed if this was not the case. 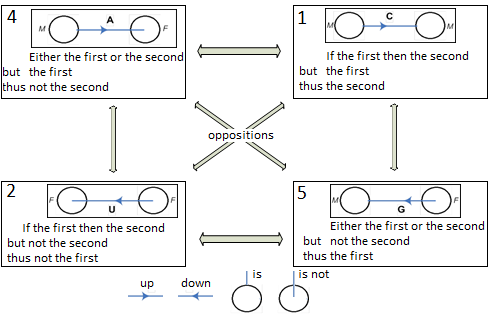 Figure 1. Four of the five undemonstratables of Chrysippus from a semiotic square.

Chrysippus and the Grand Unification

The ancient Stoics have been the historic mentors for the material presented in this Blog. They developed the most successful and diverse form of monistic philosophy that the Western world has ever seen. Zeno provided the intuitive and informal core elements of the doctrine. The logic of Chrysippus marked the first tentative steps towards the formalisation of a unifying science. The full significance of Chrysippus’ contribution has been little understood by the moderns, blinded as they are by the achievements of the current day sciences. Despite these achievements, the present day sciences are lacking in any kind of cohesive unifying discipline. The unifying science pioneered by the ancient Stoics, can provide such a unification.

Of critical importance is to learn how to reason in a different way from what is customarily taught in modern schools and universities. The moderns only have a partial grasp on rationality. Modern science and mathematics only understand the notion of the true and the false. What lacks, is the understanding of truth. However, the very mention of this word, truth, can seem off putting. After all, probably more people have been burned at the stake because of an allegedly incorrect understanding of truth than for any other reason. However, buried amongst the historic debris of lost causes lurks indeed the rusted hulk of truth.
Nevertheless, as any philosopher knows well, truth of this kind must be self-justifying. For many, such as Karl Popper, the notion of a self-justifying truth is synonymous with the blind faith of religious zealots and doctrinaire extremists, something anathema to science. Popper is content with the kind of knowledge where each proposition is forever condemned to the judgment that it might be false. Even worse, at the same time the proposition must accommodate the stark reality that this judgment might indeed be true. Then again, it might not. Modern scientists are a brave lot.

The stark truth about truth is that it must be relative and never absolute. Only in this way can it become an absolute truth. In other words, it becomes an absolute truth relative to itself. This is the essence of monistic philosophy: It is the rationality of the self-justifying Self. Relative to this subject, there is only one truth.
We have already made inroads into the science of the subject. Unlike the analytic rhetorical type reasoning of analytic philosophy, the reasoning of this right side, monist philosophy, is expressed in terms of oppositions and oppositions between oppositions. It is in this way that the reasoning becomes a relativistic form of reasoning. Rather than rhetorical, it becomes dialectical. The nuts and bolts of the reasoning deals with the dialect of two entities, one which has and the other that is. These entities differ by gender, the first corresponding to the feminine gender, the second to the masculine. The dialectic of to have and to be, constitues the core essence of the monistic, right side form of reasoning.

Finding an answer to these kinds of questions is key. It is here that we find the great enigma of this science. Unlike the analytical thinkers who want to understand the relationship between Mind and Body in terms analogous to that between horse and cart, the synthetic monist thinker must take a different tack. The horse will not be separated from the cart, but treated as an organic whole. One cannot have one without the other. We came across the very essence of the monist solution in the form of the gender construct. Rather than plucking attributes from a predefined definitional framework or harvested from empirical measurements, we constructed the one single fundamental attribute from which stem all other attributes of our science. This was the attribute possessed by the pure feminine entity. The attribute, an entity in its own right, was the masculine entity. These two entities are different. They differ by gender. However, they are absolutely indistinguishable. Two entities are distinguishable if they have different attributes. Here there might be two entities, but there is only one attribute between them: two entities; one has an attribute, the other is the attribute.

This gender construct provides the generic formula for all of the science that follows. The dialectic of the masculine and the feminine provides the generic base for all other seemingly dyadic structures such as the popular Mind-Body duality of the analytic philosophers. The relationship between the pure feminine and masculine is a generic form of the same relationship between Mind and Body.

Not everyone will agree with this assertion. Certainly, an analytic philosopher or anyone reasoning from a Cartesian viewpoint would take the abstract road, abstractly arguing that Body is like a machine and Mind is an intelligence that drives the machine. The two are linked together by some kind of “bridging laws” perhaps. There is no dialectic here, as the notion of a bodiless mind and mindless body, is considered quite respectable. They can conceivably go their separate ways: put the brain in the bottle and the brain dead body on life support, should do the trick.

Such a surgical separation is impossible for an organism constructed from the gender construct. The organism is constructed according to a four-lettered code. According to our gender calculus version of this code, each letter is made up of one of the four binary gender typings, MF, FF, FM and MM. On the face of it, the organism might be just a highly complex assemblage of hydrocarbon-based compounds. However, from an organisational point of view, it is a seething mass of intertwined, gendered entities. It is this gender typing of content and form of the organism that ensures systemic coherence. It is in this way that the One can be constructed from the inseparable and indistinguishable Two.

The Stoics saw this dynamic systemic organisation of the organism in terms of the tensions and tenos of a fifth kind of substance they called pneuma.
The pneuma is in constant motion. It is a process into itself, and from itself. The inward process produces unity and substance, the outward process dimensions and qualities. The pneuma is a disposition (hexis) in process. As a disposition, the pneuma holds the cosmos together, and accounts for the cohesions of each individual entity. The pneuma is the cause of the entity being qualified: for the bodies are bound together by these. [Chrysippus views on the pneuma (Reesor, 1989)]

The coherence, the very being of an organism, is synonymous with it maintaining Oneness. The mechanism for achieving and maintaining Oneness is through the establishment and maintenance of gender typing. The organism must know, without a shadow of doubt, what it has and has not and what it is and is not in all cases. These are the key determinants of consciousness. In addition, the determinations are purely relative. They are purely subject-ive. This, one must admit, is truly a beautiful, self-referring system.
Beautiful indeed, but how does it work? With profound beauty, one would expect an accompanying simplicity, a profound but simple principle. Seeing that everything involved in this kind of self-organising organism is relativistic, there should be some fundamental relativistic principle at play. In the traditional sciences of our day, the only relativistic principle known is in physics. There is no known equivalent in biology. In physics, we see relativity theory expressed as demanding that the laws of physics remain invariant from one reference frame to another. Perhaps more pointedly, as shown by Zeeman, the principle of relativity is intimately bound up with the non-violation of the causality principle. It is here that one can grasp the simplicity and elegance of the theory. System coherence demands the coherence of causality. The claim of generic science is that this is not enough. A much more demanding form of relativity is we call generic relativity.
If the work presented in this book is to be more than the usual exposition of inconclusive philosophical prose, then we should be able to advance an equally simple and elegant formulation concerning the essence of generic relativity, the cornerstone of the generic science we are trying to develop. Fortunately, we do not have to look very far. The principle is located at Ground Zero and there is no one who knew this spot in the Cosmos better than Chrysippus, the Stoic logician par excellence. Ground Zero is the location of the Logos, the reasoning faculty of any subject whatsoever. The form of the Logos can be understood in terms of the dialectic of having and being, a form expressed by the semiotic square. Chrysippus provided the logical framework of the Logos semiotic square in the form of four of his five undemonstrat-ables. We have resurrected this structure as an alternative to Aristotle’s Square of Oppositions, discussed previously. We have named this the Chrysippus’ Square of Oppositions. The fit between this structure and the four undemonstratables is comfortable and reasonably self-evident. The structure effectively provides an additional logical impetus to the thrust of our argument. The four undemonstratables provide a logical dimension to the interpretation of the four-element theory and the corresponding four letters.

Chrysippus and Stoic Logic
Is Category Theory Important for Philosophy?